GOP: We came up with a new healthcare plan.

GOP: Do you want to know what it is?

Donald Trump: No, I want to know what it's called.

Donald Trump: I want to call it the "World's Greatest Healthcare Plan".

Donald Trump: Do it or I'll press the nuclear.

GOP: It's a great name. The greatest name ever. 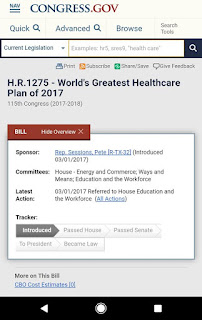 Thanks for sharing, this is a fantastic blog post. Much thanks again.